"The Tragedy of Julius Caesar"﻿ 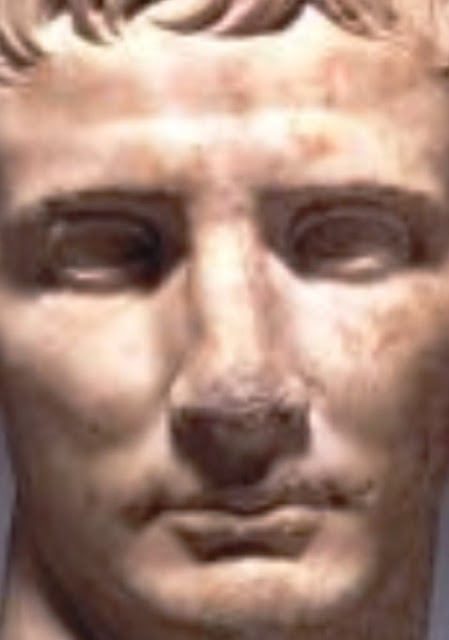 Posted by Cape Ann Shakespeare Troupe at 12:53 PM No comments: 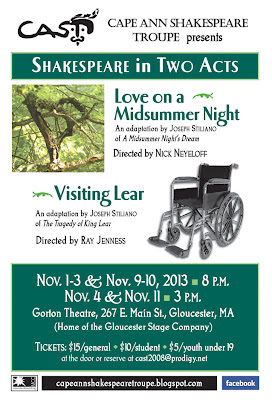 Posted by Cape Ann Shakespeare Troupe at 11:23 PM No comments:

Cape Ann Shakespeare Troupe is casting its March production, "The Tragedy of Julius Caesar". Rehearsals begin December 4th, break for the holidays and start again on January 3d. Anyone interested in being a player or working tech/backstage support may contact director Joseph Stiliano at cast2008@prodigy.net
Posted by Cape Ann Shakespeare Troupe at 9:39 PM No comments:

Our first presentation of the season, "Shakespeare In Two Acts", will be performed the first two weeks of November at the Gorton Theatre ( home of the Gloucester Stage Company). ﻿The program consists of "Visiting Lear" and adaptation of "The Tragedy of King Lear", set in a nursing home, with three players performing eight roles. Open are the roles of the attendent (Kent, Fool, King of France, and Oswald) and the nurse (Goneril, Regan, and Cordelia).
The second play is "Love On A Midsummer Night", taken from "A Midsummer Night's Dream", and requires five players: #1, Hermia & Titania; #2, Helena & Puck; #3, Demitrius & Bottom; #4, Lysander & Oberon; #5, Narrator.
Also needed is backstage and front of house help.
Interested parties should email cast2008@prodigy.net .

Posted by Cape Ann Shakespeare Troupe at 1:17 PM No comments: 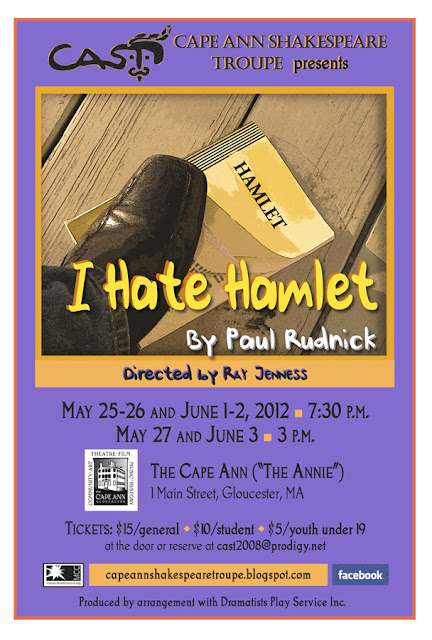 ﻿
Posted by Cape Ann Shakespeare Troupe at 10:55 AM No comments: 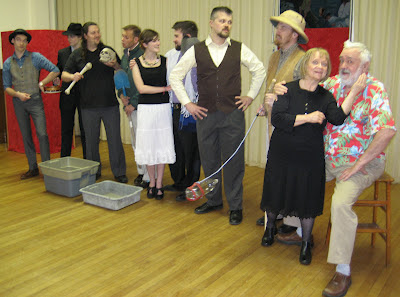 Posted by Cape Ann Shakespeare Troupe at 11:01 AM No comments:

CAST's next production is its fifth annual birthday tribute to William Shakespeare, "A Shakespeare Celebration". The theme this year is "Enter the Clown", featuring some of Will's best loved jesters, fools, and windbags. Enjoy a fun filled evening of scenes, sonnets, and songs followed by birthday cake and punch.
April 27 and 28 @ 7:30 PM at the Old Sloop Coffeehouse, 12 School Street, Rockport.
Tickets:$15; $10, student; $5, youth under 19 At the door or reserve at cast2008@prodigy.net 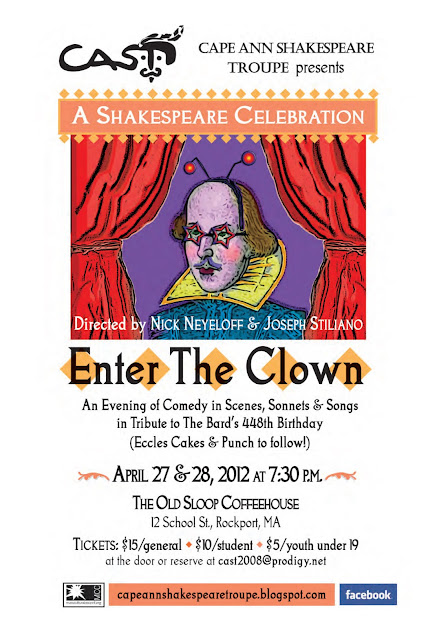 ﻿
Posted by Cape Ann Shakespeare Troupe at 11:54 AM No comments: 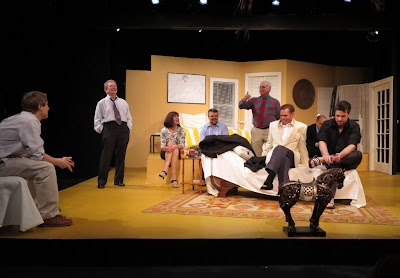 http://shar.es/gLWrq  Check this out and come see for yourself. 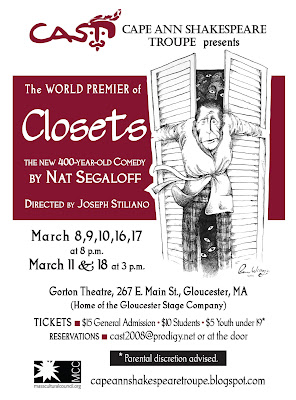 ﻿
Posted by Cape Ann Shakespeare Troupe at 4:07 PM No comments:

Closets
The new four hundred year old comedy.
By
Nat Segaloff
Inspired by Ben Jonson's 1606 satirical comedy, Volpone.
Synopsis﻿
﻿Act I: Calvin Cohoon, a young gay escort, has been sent by his agency to the West Hollywood home of Julian Reynolds, a well off forty-something gay man. Julian surprises Calvin by informing him that he's not interested in sex, but wants his help in contriving a grand deception. Julian has spread word that he is fatally ill and has summoned to his side the three people who have been closest to him: his ex wife, his ex lover, and the straight man who got away. He tells them he will leave his entire estate to the one who proves most generous to him in his waning days.
The first to arrive is his ex wife, Sharon Wilson, a lawyer. She brings Julian a gold humidor as a gift and tries to persuade him to choose her as beneficiary. When Julian demands that she does a good deed as a requirement, she storms off.
Charles Claypool shows up next with his 18 year old son, Adam. Charles, Julian's college room-mate, is the straight man he always wanted but could never have. While Julian and Charles go over the pain of Julian's unrequited love, Adam, in the kitchen with Calvin makes a pass at him.
After the Claypools leave, the ex lover, Brendan Rockford arrives with his young boy friend, Paolo. Calvin and Paolo recognize each other from their street hustling days, and while Brendan and Julian bitch about old times, Paolo admits to Calvin that he is working Brendan for an income. After Brendan and Paolo leave, Julian is enticed by Calvin's description - and Brendan's jealousy - of him. To sneak his own peak at Paolo, Julian disguises himself as homeless man and follows Brendan and him on the street.
The next day, with the plan set in motion, Adam comes to visit Julian, but actually is there to cruise Calvin. When Brendan and Paolo show up, Calvin stows Adam in Julian's closet. Brendan has come to persuade Julian to name him beneficiary and Calvin suggests he use Paolo as a bargaining chip. Brendan reluctantly yields and sends Paolo into Julian's bedroom.
Suddenly Charles shows up looking for Adam. Julian, not knowing Adam is in his closet, pushes Paolo in there too. Charles angrily accuses Julian of still being attracted to him, and Julian responds by saying that Charles could inherit his wealth if he disinherits Adam and commits his holdings to him. Adam overhears this from the closet.
Now Sharon bursts in and threatens everyone by revealing that she and Julian are still married - Julian never signed the divorce papers - and that she is his heir. Adam and Paolo come out of the closet, Brendan hovers - and Julian has a heart attack. Curtain.
Act II: While everyone else is at the hospital awaiting word of Julian, Adam and Paolo stir in Julian's loft. Adam is enamored of Paolo, but Paolo discourages any idea of a continuing relationship, pointing out that Adam is young, attractive and has his life and the world spread out before him.
Brendan, Charles, and Sharon arrive angry that Calvin has not let them see Julian at the hospital. They reminisce and bicker before Calvin arrives with the news of Julian's death. He is about to read Julian's will when the doorbell rings and Detective Rupert Feckling strides in.
Feckling reveals that Julian did not die of a heart attack; he was poisoned. Everyone in the room had the means, motive, and opportunity to do him in and Feckling lays out scenarios of how each could have killed Julian. He makes each of the beneficiaries squirm under his interrogation, then, ... you'll just have to come see Closets to find out.﻿
About Closets
When Nat Segaloff wrote Closets, he was encouraged to keep developing it by his friend the comic actor Dom DeLuise who offered to hold a table reading at his home. This, he urged, would give Nat a sense of how his dialogue sounded when spoken and would give valuable clues for rewrites. Dom, his wife Carol, son Michael and others did the reading and gave support to Nat's effort.
One rewrite later, Nat sent the script to Joseph Stiliano as a possible production for the Cape Ann Shakespeare Troupe. Although a new play, its Elizabethan/Jacobean roots made it fit in with CAST's season without ruffling too many feathers - or doublets.
About Nat Segaloff 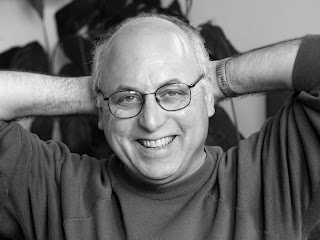 photo by Liane Brandon
Nat Segaloff is a journalist (Boston Herald, CBS Radio), turned college teacher (Boston College, Boston University), turned author (11 books), turned producer (A&E, TLC, USA and others) with a background in motion picture marketing and publicity (Paramount, Disney, Columbia, Fox, UA, MGM, etc.). His varied works include Hurrican Billy: The Stormy Life and Films of William Friedkin and most recently, a biography of legendary director Arthur Penn (Bonnie and Clyde) titled Arthur Penn: American Director, published last spring by the University Press of Kentucky. (Not only a fine biography but an excellent source on the technique of directing. - J.S.) Nat's The Everything Etiquette Book, The Everything Trivia Book, and The Everything Tall Tales, Legends and Outrageous Lies Book are in multiple printings and reflect his interest in a wide variety of subjects. He formed the production company Alien Voices with John de Lancie and Leonard Nimoy to produce science fiction programs with Star Trek casts. He is co-author of The Waldorf Conference, about the secret meeting that began the Hollywood Blacklist. Nat has produced network Biography episodes on John Belushi, Larry King, Stan Lee and others; four documentaries on rock and roll; an HBO special on parole boards; and was staff producer for the Africa Channel. He is also a witty frequent guest panelist on the NPR word/game show "Says You".
Closets Cast
Jonathan Arnold as Paolo
Timothy "Cowboy" Bagley as Adam
David Cluett as Calvin
Rebecca Shrimpton as Sharon
Kenneth Stoeffler as Brendan
Jayson Winer as Charles
Edward Zaleski as Julian
Directed by Joseph Stiliano
Posted by Cape Ann Shakespeare Troupe at 11:23 PM No comments: