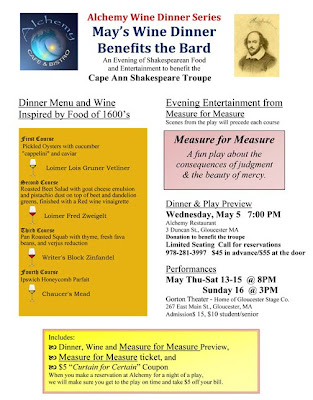 Please join us for an evening of great food and entertainment at one of the North Shore's finest restaurants. Included in the price of the dinner are wines and a ticket to a performance of Measure For Measure at the Gorton Theatre.

Posted by Cape Ann Shakespeare Troupe at 3:37 PM No comments: 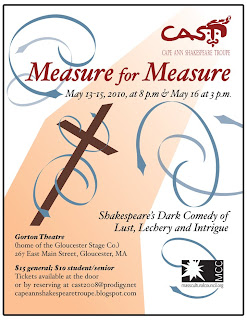 Measure For Measure is a dark comedy of lust, intrigue and justice set in sixteenth century Vienna. The story involves, among others, a young man sentenced to death for fornication, his sister, a novice in a nunnery, a self-righteous judge, and the Duke of Vienna who goes about disguised as a monk. The young man's sister pleads for the life of her brother, only to be told by the hypocritical judge that if she will yield her virginity to him, he will spare her brother. The plot really thickens when the meddling, disguised Duke decides he will set things right through a series of bizarre manipulations. Ray Jenness directs the fine cast which includes Steve Aiello, Christina Applegate, Beth Bevins, Kelsey Bevins, Sherri Gray, Gregg McLaughlin, Beebe Nelson, Nick Neyeloff, Nathaniel Punches, Jim Robinson, Matt Schwabauer, Michael Siering, Elinor Teele, Michael Wescott and Jennifer Wilson. The stage manager is David Perrigo; costumes by Susan Frey. Produced by Joseph Stiliano.
Gorton Theatre
(Home of Gloucester Stage)

Tickets available at the door
or by emailing cast2008@prodigy.net
Posted by Cape Ann Shakespeare Troupe at 3:29 PM No comments: 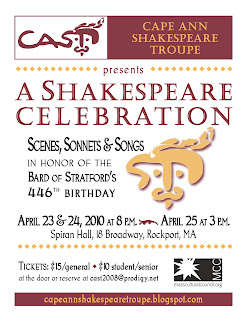 Celebrate William Shakespeare's 446th birthday with us!
April 23, 24 at 8 PM, April 25 at 3 PM
Spiran Hall, 18 Broadway, Rockport
The performance will include scenes, sonnets and songs with English birthday cake and punch afterward. Special guest group 'Leven will treat us to songs of the period with their particular flair and verve.

Tickets are $15, general; $10, student/senior and a special offer of $5 for Cape Ann students 18 years and under. Available at the door or reserve at cast2008@prodigy.net.
Posted by Cape Ann Shakespeare Troupe at 11:04 AM No comments: